I heard a bird sing
In the dark of December
A magical thing
And sweet to remember.

12/1     Brrr… the chill is here even though winter has not officially arrived. The ducks raft on Lake Carmel by the hundreds. Winterberries on the sunny lakeside brighten the cool blue scene. 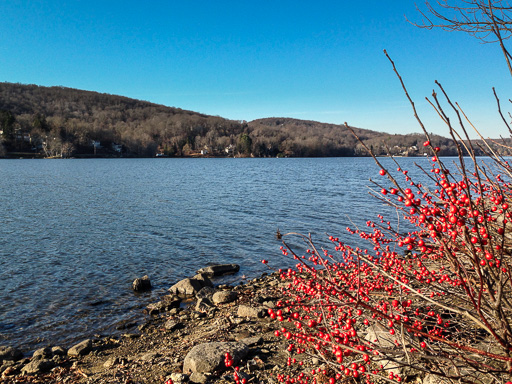 Winterberries stand out even without snow. Photo: Beth Herr

12/2     I had an unusual report of a spotted salamander being found active last night in nearby Sherman, CT. Apparently it was found crossing my friend’s driveway. Perhaps the mild temps and rain drew it out of its labyrinth! She sent me photos…it was 8” next to a ruler, very nice size!  — John Foley

Ed. Note: Spotted salamanders are known for their spring migrations to breeding ponds. Most of the year they stay hidden in their underground chambers unless it is dark and rainy; reports of these salamanders in December are rare.

12/2     Winds from the south warmed the air enough that the heavy clouds brought rain instead of snow. Whew.

12/3     Two inches of rain in two days cleaned and freshened Kent. Morning sun warmed the wet earth. The frigid temps before the storm were not enough to harden soil. Wonderful earth smells stirred and the air was fragrant, clean. 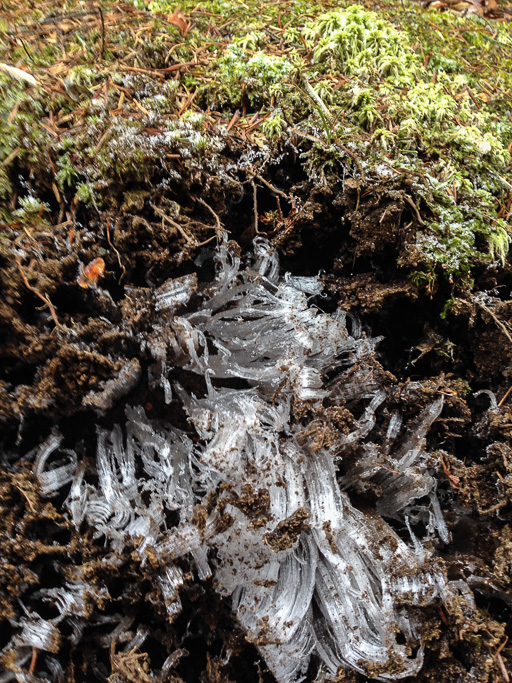 12/7     I spied a nature drama at my bird feeder that I’ve never seen before. A downy woodpecker startled by a broad-winged hawk scrambled inside the bird feeder for protection. The determined hawk managed to dig the woodpecker out of the tube with its talons. It dropped to the ground to eat the prize but first turned to look at me with piercing red eyes. Wow!  — Judy Kelley-Moberg

12/7     Another day so mild and sweet reminded me of winter days in South Carolina. But other signs were northern: low light of the sun, low humidity, low number of daylight hours. High top boots and long scarves are not needed.

12/9     Hudson Valley hardwoods produced a bountiful mast crop this year, primarily acorns, and gray squirrels have been busy shopping for winter. I watched a half dozen of them scampering around under two large red oaks, and it seemed like they were very caught up in their task. Out from a tree line came a raptor – flap-flap-glide, flap-flap-glide – a Cooper’s hawk. Without a sound or a shadow warning it deftly grabbed a gray squirrel and flew behind a hedgerow to partake of its meal. In this instance, a careless squirrel’s DNA will not produce careless offspring.  — Tom Lake

12/14     Maybe I should not have been so surprised given the run of warm fall weather, but I still had to look twice to believe that I was looking at brilliant yellow dandelions in bloom in mid-December.  — Phyllis Lake

12/15     After last night’s rain and rumbles of thunder, today’s air was clean and fresh. Strong winds gusting to 30mph pushed small puffs of clouds across a clear blue sky. While walking in Fred Dill Wildlife Sanctuary in Carmel I almost stepped on a garter snake right on the trail! About 18” long, it was as startled as I and rustled off before I could get a photo. Also heard a lone spring peeper piping as if it were spring, and a flock of bluebirds chirping in the sunny valley. The sky at sunset was like a chest of precious metals, silver, gold, steely gray.

12/16     Frankly, I find it unnerving to encounter so many flowers in winter.  — Duncan Brine 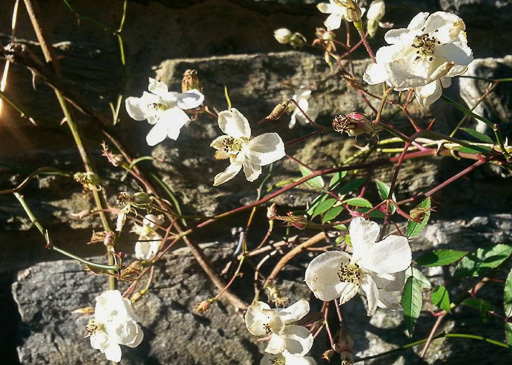 You’re supposed to be asleep until spring! Photo: Duncan Brine

12/16     News reports alerted New York City residents that the spectacular sunsets of late are due in part to high pollution levels and stagnant air.

12/17     It was an overcast and foggy day. There was no color when looking through the trees to the sky – gray and black and dreary. There must be creatures who benefit from and like the cover of fog and humidity, but humans aren’t among them.

12/19     A consistently strong and bitter wind brought the first real smell and feel of winter.

12/19     Just found another pile of bear scat with that hairy fibrous fungus growing out of it. It is similar to the one I discovered last month. Any ideas?  — John Foley 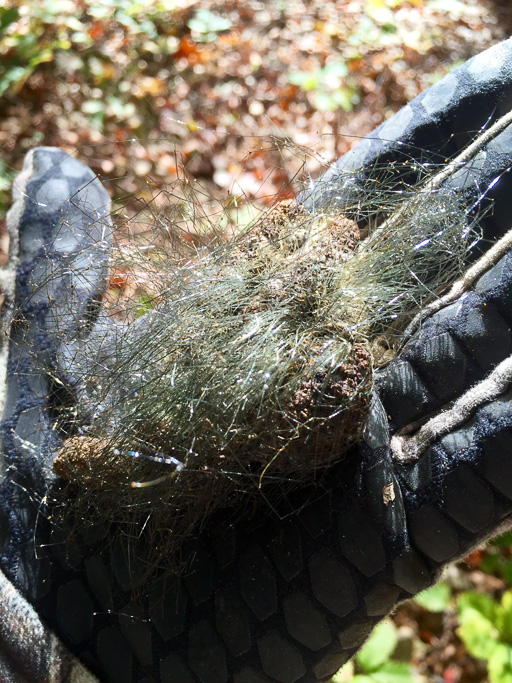 Ed. Note: The fungus was identified by a KCAC member as a kind of Pilobus. From Wikipedia: “The life cycle of Pilobolus begins with a black sporangium that has been discharged onto a plant substrate such as grass. A herbivorous animal such as a horse then eats the substrate, unknowingly consuming the sporangium as well. The Pilobolus sporangium survives the passage through the gastrointestinal tract without germinating, and emerges with the excrement. Once outside its host, spores within the sporangium germinate and grow as a mycelium within the excrement, where it is a primary colonizer. Later, the fungus fruits to produce more spores.”

12/20     Yesterday’s cold wind blew all the haze away, leaving a deep blue sky as backdrop for a few chevrons of geese. The birds heard nature’s message.

12/21     I brought home fresh fragrant white oak shavings for garden mulch. As the temperature was 65°, my honey bees were flying all over it. Were the bees bringing particles back to the hive as pollen look-alike? There are two more theories from my beekeeper colleagues: 1. the bees are gathering tree resin to make propolis and 2. they are seeking fungal spores. The latter would be more appropriate for an old saw dust pile.  — Ralph Szur

12/21     Just before midnight the solstice arrived and winter, too. The sun will follow the same track through the sky for a few days, but by Christmas it will begin to climb higher, giving us longer days.

12/22     This week featured several days with high-temperature records tied or broken. The only white Christmas in the watershed may be in the high peaks of the Adirondacks. We also had some results from Christmas Bird Counts. Over time, these counts are a good barometer of both species richness and diversity. This year, an unseasonably warm late autumn likely affected the counts.  — Tom Lake

12/22     Here’s a sample Christmas Bird Count from Alan Mapes: “Twenty-five of us participated in the twenty-ninth annual Albany County Christmas Bird Count. The 74 species found by our eight field parties was the second highest number in the [survey’s] history, tying the 1998 count and second only to the 81 species found in 2001. New [this year] was our first American woodcock. Also seen was a single ruby-crowned kinglet, only the second one found in all the years of the count. Waterfowl numbers and variety in general were high, with nearly all the waters free of ice. Purple finch numbers were the highest since 1996 at 95 birds. Significant declines were seen in Carolina wren and eastern bluebird. Other notable finds were a northern goshawk, a yellow-rumped warbler, a swamp sparrow, several red-winged blackbirds, and two pine siskins.”

12/26     This mild and sunny day was perfect for a walk around Lake Gleneida. The views toward the town of Carmel were pleasant and bright with holiday decorations. The hum of after-Christmas traffic did not disturb the beauty of the scene. It was disturbing to see the water level so low. It was proof that our area is eleven inches of rain behind normal trends.

Lake Glenida could use some of the missing 11 inches of precipitation. Photo: Beth Herr

12/27     A quick survey of my neighborhood turned up a lone Hepatica in flower.

12/27     A walk through a tall-grass meadow in a winter without snow was filled with revelations. Several meadow voles’ nests were seen. Here is one naturalist’s explanation:

Most meadow vole nests are constructed out of dried grasses on the surface of the ground, although they are sometimes built at the end of shallow burrows. When above ground, the nests are often located in the center of a grass tussock, where they are less apt to be flooded. When there is snow on the ground they are a bit easier to find, as the heat of the voles inside the nest melts away the snow, forming a chimney that sometimes reveals the nest below.

Meadow voles (Microtus pennsylvanicus), tiny mouse-like rodents, spend a majority of their time on the surface of the ground, particularly in moist fields filled with grasses and sedges. They have elaborate runways through the vegetation – well-worn trails about the width of a garden hose which they keep mowed down with their incisors. Latrines of small brownish-green pellets can be found intermittently along the trails.

Neat and tidy, someone is prepared for winter’s chill. Photo: Mary Holland

12/28     Woke up to a coating of ice and snow a few inches thick. It was enough to prompt me to retrieve the snow shovels and ice scrapers. The evergreens drooped under the weight, even hardwoods stooped. Every surface was outlined with gray ice. By day’s end the intermittent rain had started the melt. It was a brief taste of winter in an otherwise incredibly mild month.

12/30     A long string of cloudy, dark days dampened spirits. Shoppers were overheard yearning for the sun. Only the determined ventured outdoors; streets and trails were quiet despite mild temperatures. And today, heavy, heavy fog shrouds our world again. Driving was very slow, sounds were dulled, and humans burrowed into their lairs.

12/31     The moon provided a screen for New Year’s celebrations across New York. Nature hardly noticed. The honeybee queens have already laid eggs, the owls have found mates, and some plants have begun to grow. That is only natural.

12/31     The temperatures however were not natural at all. December 2015 was the warmest ever recorded across the globe. 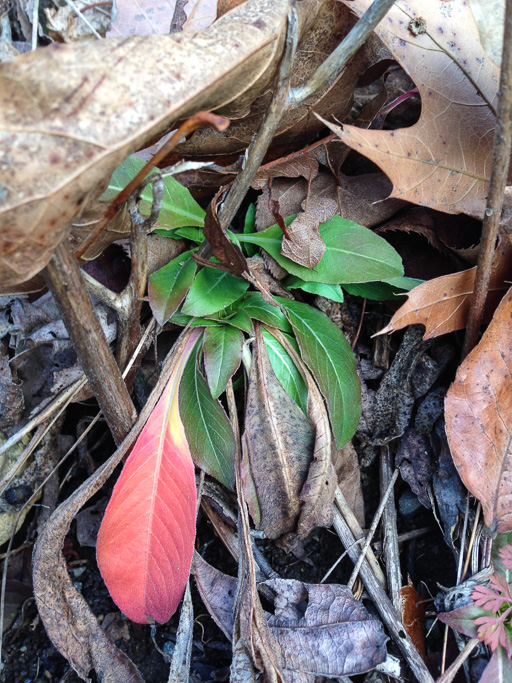 Ready to go when the conditions are right. Even in December. Photo: Beth Herr