Beauty and wonder are close at hand. Photo: Diana Lee

7/1     A fresh, early morning walk on the Nichols Street causeway reaffirms that beauty and wonder are close at hand. In my first steps a great blue heron lands on a rock, takes a good look around, and flies off. I wonder about the plants on the causeway after the road-widening project. As always, nature is reasserting life into every nook and cranny – daisies, chicory, honeysuckle, Queen Anne’s lace, poison ivy, yarrow, among others. Some of the trees are re-sprouting – maple and ash notably. I spy a water snake contentedly perched on a log. The clear maroon patterning indicates a youngster. An insect hatch begins and fish start jumping. What a great way to start Independence Day weekend!  — Diana Lee

Just relaxing and taking in some rays. Photo: Diana Lee

7/1     Fall migration begins though it seems the summer just started: “Yes, it begins! The first sign of southbound bird migrants was ring-billed gulls passing down the Hudson River. They were also building up in numbers at the flats down by Four-Mile Point and probably at other gull-gathering places. These are likely non-nesters and failed nesters from Lake Champlain. Now is the time to check for shorebirds; both dowitcher species have been showing up elsewhere in the northeast. Now is also the time to be especially alert for rare vagrants. Cold fronts sweeping in from northwest Canada and Asia do carry the occasional extreme rarity to our area – think sharp-tailed sandpiper, for example.”  — Richard Guthrie in The Birding Lists Digest

7/1     The first day of the month of the Thunder Moon was announced by a booming thunderstorm at day’s end.

7/2     Three black bears were in my yard today. They appeared to be a male, a female, and a cub. They stayed for about three hours just walking around but at one point the cub fell asleep. The male tried unsuccessfully to take down our bird feeders aligned on a high cable. As soon as it was safe, we brought our feeders into the house.  — East Fishkill

7/3     A vine had snaked its way to the top of our side-porch railing today. “I’ll need to trim it back before the whole thing is covered,” I thought. As I took a closer look, I saw something quite interesting – a bunch of ants had set up an aphid farm on the very end of the vine and were diligently tending their herd. I feel kind of bad about tearing up the farm, but I do need my porch railing back.  — Dave Ehnebuske

7/4     Hiking to the top of Anthony’s Nose offered a grand panoramic view of the Hudson Highlands. I often overlook the fact that, close to the ground, there are lizards in the Hudson Highlands. On my way back down I heard a rustling in the leaves that I took to be a chipmunk. It was an adult five-lined skink. He was a very sleek and stealthy traveler as he effortlessly crossed all sorts of terrain, up and over large rock formations, and into the forest.  — Scott P. Horecky

7/4     The sunsets these last four days have been breathtaking, such a lingering and changing show of colors.

7/5     A light rain fell last night, but the heavy clouds were lifting by morning. The air was fresh and clear by day’s end.

7/6     A beautiful morning surveying breeding birds with Anthony Ciancimino. This is part of the site analysis WildMetro is conducting for NY State Department of Environmental Conservation. We had a total of 80 species at the site today. Both Baltimore and Orchard Orioles were feeding fledgelings, as were many other species. Bird song is greatly diminished now and many birds are already migrating. Highlights were some bobolinks passing overhead, a black-billed cuckoo still calling, and a single immature or female merlin falcon.  — David Burg

7/8     The first cicada song heard today. High in the trees, the cicadas buzzed and rattled a long song. They must be happy to have crawled out of the ground after seven years in the dark, feeding on tree roots. With a new skin, wings, but no mouth parts, the cicada announced the beginning of the insect chorus. They will soon be joined by crickets, grass hoppers and katydids.

7/10     Cumulative cumulus after a couple of rainy days. Blue sky morning. But summertime is changing; bird song is diminished. Only the insistent wren still sings all day long. Occasionally, the deep woods were decorated with the song of the wood thrush and the tanager, and in the fields the indigo buntings still sang with exuberance. But the dawn chorus has gone silent as bird families molt and get ready to head south.

7/11     How my Hummingbird Trained Me: Some of you may recall last year about this time I told my story about trying to capture backyard images of this creature whose wings beat at 80 times a second, whose heart beats at 20 times a second and who, in order to keep up with a metabolism which is the highest of any warm-blooded animal, has to consume her body weight in nectar every day. In any event I think I prevailed in this battle of bird brains with bigger, brighter pictures this year.  — Charles Daviat

7/15     While it has been quite dry, a few passing thunderstorms provided enough water for a mushroom bloom in the forest. Usually two or three days after a rainfall the fruits of different fungi push out of the soil. Today I found four types of boletes, and plucked one that had just “hatched” with the characteristic egg sac. There were also coral mushrooms, and Indian pipes blooming.

Since we all have stems topped by caps with pores instead of gills, we’re all “boletes.” Photos: Beth Herr

7/19     It was early morning on the day after a series of violent thunderstorms (an inch of rain). The air temperature had dropped 15° and there was a stiff and cool westerly breeze.

7/21     The local paper’s headline today: “Get ready for more chipmunks.” Reports about abundant chipmunks are old news. Anecdotes of the little striped mammals leaping, swirling and scurrying about abound. Imagine even more of the little guys.

According to the NYSDEC, “The lack of sustained snow cover last winter allowed chipmunks earlier access to food, increasing the likelihood of females birthing two litters this summer. So the current abundance of chipmunks is probably an indication that, this year, many female chipmunks gave birth to an early litter in April or May and many will have a second litter in August or September.” No doubt this is good news for raptors, coyotes, bobcats and fishers!

7/21     Gypsy moths were laying eggs on the trail up to Mount Beacon. I had been wondering why there seemed to be so many more pockets of leaf damage around the Hudson Highlands, then read this from Mary Holland:

“Conditions were very dry in parts of New England in May 2014 and May 2015, which impeded the growth of a certain kind of Japanese fungus (Entomophaga maimaiga) that keeps the gypsy moth caterpillar population under control. Without this fungus present to keep their numbers in check, gypsy moths have flourished.

“Although there was some rain this spring, there were many areas that did not get enough to benefit the fungus, and in these areas, trees are now stripped of their leaves. It is possible in places in southern New England to track the pattern of rainfall simply by looking at where trees are still in full leaf. Fortunately, the time has come for gypsy moth caterpillars to pupate, so most of this year’s destruction has already occurred. Here’s hoping for a rainy May next year.”

Starting the next generation of gypsy moths. Photo: Beth Herr

7/23     The wood thrush was calling in the moist morning woods. Was he saying farewell or just teaching his youngsters ethereal flute-like melodies?

7/23     Hazy, hot and humid. I took a break from weeding and rested on the porch. Waiting for a breeze to cool the sweat on my forehead, I had the distinct feeling that I was being watched. I sat quite still and scanned the scene. I spied a pair of eyes looking at me! Hiding under the cover of my weather monitor sat a little spring peeper. No doubt the shade and humidity was perfect for the tree frog. And likely the nearby porch light provides fast food.

Trying to keep cool and damp in this hot weather. Photo: Beth Herr

7/24     Day nine of temperatures above 90° and the thermometer topped at a sweltering 94°. The humidity felt higher. Few people were seen at Ryan Park or the Imagination Station playground. There were a few swimmers and boaters at White Pond, though water levels there have dropped even more: The dock was removed, the shoreline fifteen feet from usual level. Pity for the workers who are struggling to repair that dam, tar roofs, repair roads and teach summer camp during this prolonged heat wave.

7/25     Not one, but two squalls blew through pausing the heat wave. Cool downdrafts churned the trees as dark clouds stopped the sun. The first storm was a downpour; the second wave a lovely, long, drip-drip rain. Almost one inch of precipitation gave nature a good drink.

7/26     Yesterday’s storm ushered in drier air and the morning was pleasant and cool. The first goldenrod blossoms burst upon this summer scene adding the first blush of autumn. Still the indigo bunting and the wren sang, but the forest was dark and deep and silent.

7/29     This month it’s been interesting to see that almost no birds except lots of goldfinches and house finches – mainly the gray little females and young – have been visiting the bird feeders. Only “cameo appearances” by bluebirds, the male rose-breasted grosbeak, Carolina wren, phoebe – most of the birds that were plentiful earlier. Barn and barred owls still talking at night. We had one sighting of a broad-winged hawk.

Volunteers: a single bread-seed poppy appeared in the grass out of nowhere – we hadn’t planted any here in years. And a wonderful stand of sunflowers grew up around the feeder. It’s a reminder that once all our plants were volunteers, and some still are, if we give them some habitat.  — The Balant-Campbells on Whangtown Road

7/30     It was ghastly hot and humid for today’s 4-H Fair. Luckily the thunderboomer that brought relief arrived at the close of festivities. A nice, long rain soaked the parched ground. It will be interesting to see if the creeks rise too or if thirsty plants will soak it all up.

7/31     Woke up to two and a half inches in the rain gauge after a steady rain last night. What a relief it is to have cooling clouds, moist ground and puddles. And what a great way to end a long stretch of very hot and very sunny weeks. Stayed overcast and muggy all day. Mosquito count is high, and slugs are all over. By day’s end, we had a whopping five inches of rain! 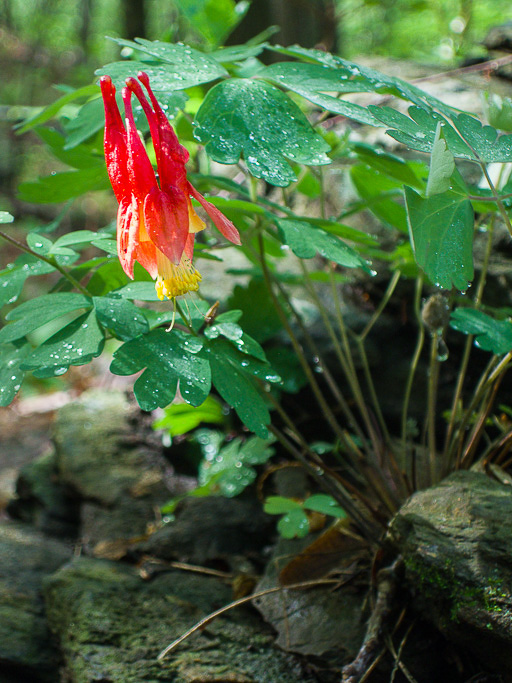 After the Rain. Photo: Dave Ehnebuske

Grab your camera and capture the nature of Kent. Send your best images to enter a juried photo competition. The winning photos will be exhibited at the Kent Public Library for the month of December and will be included in the Kent Nature Almanac. Beautiful scenery is easy to find in our town. Abundant biodiversity awaits in Kent’s lakes, cliffs, forests and backyards. Focus your camera and capture the beauty.

A maximum of three submissions per photographer will be considered for the show. They will be judged on artistic merit and how they express an aspect of nature in Kent. Explain where and why you took the photos. Recommended photo size: 1920 x 2400 pixels or larger.

There is time to capture a winning image in the two coming seasons. The deadline for submitting images for the contest is October 31, 2016.